Dear CSIR NET/JRF Mathematics Aspirant,
In this video you will get the valuable tips from Dubey Sir to crack the CSIR NET/JRF in 6 Months. 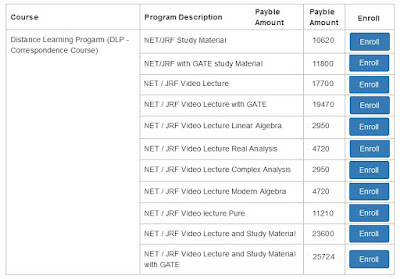 Here are the tips Dubey Sir has given to NET math aspirant to crack NET/JRF in 6 months.
Unique Features Of Our Video Lectures
at March 05, 2020 No comments:

Things to Keep In Mind While Preparing for IIT JAM Mathematics

As it is mathematics is considered to be one of the toughest subject to learn and understand but to add to that preparing for IIT JAM Maths can be a little overwhelming for the candidates. Mathematics is a subject that requires constant written practice to solve the problems, questions and equations. Given the huge and extensive syllabus that the subject has, to complete it within a small limited amount of time becomes tiring for the mind.
The IIT-JAM exam has to be one of the highest pursued courses. IIT JAM exam has a lot of scope after clearing in order for the students to clear for the government jobs as well as in the private sector. The students can go for jobs in the research and teaching field and even opt for PhD. programs. It is true that a competitive environment will motivate you to do improve and do better you will get a push seeing other people fight for the same goal.

Although it is rightly said that the appropriate and right coaching classes help you move in the right direction, it will drive you positively to achieve your goals.
The preparation for IIT JAM Mathematics can be made simple and effective by following certain steps and defined approach. The long hours that the subject requires to be covered is uncountable also the sincere dedication is a pre-requisite to cover every topic and chapter to crack the IIT JAM Mathematics entrance exam.

Below are a few tips and things to keep in mind while being in the process of preparing for the IIT JAM Statistics and Maths exam:
Along with these tips taking up coaching classes for IIT JAM Mathematics will increase your chances of clearing and cracking the exam; and improve your otherwise less strong areas. The competitive environment of DIPS Academy will for sure push; guide you in preparing better for IIT JAM Maths. And the better coaching institute, the result will be equally fruitful as it will add brownie points to your own preparations. You will have the best of both worlds and definitely get to learn a lot about the various topics of mathematics.

Conclusion: IIT JAM Mathematics is a tough subject that requires a lot of time, dedication and efforts. A planned and organized time will help you not only while studying but when carrying out daily activities as well. The competitive environment will push you to do better and when combined with coaching classes, it will help improve the weak areas and increase the chances of cracking the exam more.
at December 17, 2019 No comments:

This video features "What is inside?" so that you can have fare idea before buying it. This video will help you to take informed decision.

Check out the various link provided below to avail discount.

You can leave comment or query, we typically take one day to respond.
at November 03, 2018 No comments:

Every Year, large number of candidates appears for the NET (National Eligible TEST). The test is conducted for awarding the Junior Research Fellowship (JRF) to Indian national students who are doing research or PhD from various Indian Universities and Colleges.

Both these tests are held two times a year, i.e. in the month of June and in the month of December. But students getting confused between CSIR~UGC NET and UGC~CBSE NET. Basically, there is no difference between these two exams, conducting body as they made for the same purpose to determine the eligibility criteria of students who are pursuing the exam, there is only one difference regarding the subjects involved in it. Let’s understand the difference between the two bodies in a detailed manner:

UGC~CBSE NET
UGC (University Grants Commission) which was established by the Union government in the year 1956 whose main objective is to provide recognition to the university of India and provide funds to these colleges and universities. CBSE (Central Board of Secondary Education) now conducts this exam, on behalf of UGC for the post of Lecturer and for providing the JRF (Junior Research Fellowship) to the Indian nationals in order to ensure minimum standards for the entrants in the teaching profession and in research. Under UGC exam is conducted in streams such as Humanities, Arts, Commerce and Social Sciences etc.

CSIR~UGC NET
CSIR (Council of Scientific & Industrial Research) is a premier national R&D organization which is also stands among the world’s largest publicly funded R&D organization. Exam Conduct by the CSIR named as CSIR UGC NET which is a national level of Exam in Science in the streams such as Life Science, Physical Sciences, Mathematical Sciences, Planetary Sciences, Chemical Sciences and Earth Atmospheric Ocean.

JRF
JRF stands for (Junior Research Fellowship) fellowship of Rs 25000 per month, offered to both CSIR and UGC selected candidate, which is held twice in a year which is offered to pursue their doctoral studies.
at June 05, 2018 No comments:

Faculty pool: Our pool of faculty is much differs from all other institutes. Our Faculty members are alumni of IITs, IISC Bangalore, ISI Kolkata, TIFR, Delhi University and JNU etc.

Separate sessions for doubt clearing: Dips Academy conduct weekly test for their regular students. These tests cover the topics which are taught in the respective week. After the test, we organize doubt clearing sessions. Students can take the benefits of these sessions for building the concept, clearing their doubt related to that topic and also got the solution of exams.

Feedback form for Student: There is a unique activity which is being followed on a periodic basis. During this activity feedback form are delivered among student. Student can rate our faculty member accordingly with the help of this form, which help us to improve our self as per the convenience of students, that’s why DIPS Academy is so much popular among the student. Here at DIPS Academy students comes on first priority.

Use of Advance Information Technology to spread the education

Dips Academy also changes the teaching methodology with the use of ADVANCE Information Technology for the benefit for students under the guidance of Mathematics Mentor Mr. Rajendra Dubey by using all possible means or way for the students. Few of them are:

OMR SOLUTION: Here at DIPS Academy, data are collected from the student in the form of OMR Sheets. Then, with the help of this OMR Sheet, data will be updated in the advance software and thus as a result, it provides the highest level of accuracy in delivering the result to the students, updates relevant to the students (such as commencement of classes, schedule of the exams, topic covered in the schedule class etc.) and information which is useful to the students (such as information about exams, admit card and etc.).
Our advanced software is designed as per the same standard, which is used by CSIR in their Labs. Due to this the students of our Academy become habitual in filling the OMR sheet of CSIR Exams.
Due to this software we are able to provide the result of a practice test same day of the test commencement and 100 percent of accuracy level and also able to analyze even the minute change in the performance of some students which is connected by us. This helps the students and faculty in improving the performance as per the result. As a result, chances of clearing the exams with good ranks increase for our students.

Facility of Online Test Series: We  at DIPS Academy having wonderful applications for online test series, Students which are interested to join our test series can join us with the help of this mobile application. Due to this application student have the facility to give the test, evaluate themselves among all students of India, get to know about the weak areas in the preparations of exams.

Dips Academy follows a unique methodology to teach their student, which helps them in remembering the concept of subject deeply and they can perform extraordinary in the respective subjective. This methodology is made up of various unique and important points which are completely ignored by various other institutes because they people wants to commercialize the education. While here it in DIPS Academy “Mr. Rajendra Dubey” believes in the Vedic system of teaching with the use of Modern Techniques.

This Program is designed for those who are not able to join Regular Classroom Program due to any reason  but comfortable to join Weekend Ba...